The family lived around Carronshore and Airth, Stirlingshire

2. Extract of an Entry in the Register of Deaths, District of Falkirk, Stirlingshire, Entry 455.

3. SS Arletta Sinking.
At 16.13 hours on 5 August 1942 the unescorted Arletta (Master George William Stockton Rogers), a straggler from convoy ON-115, was torpedoed and sunk by U-458 south-southwest of Cape Race. The master, 27 crew members and six gunners were lost. The chief officer William M. Duncan and four crew members were rescued after 15 days adrift by the US Coast Guard weather ship USS Menemsha (AG 39) and landed at Boston on 25 August.
The ship, sailing alone, was torpedoed 300 miles from the nearest land and sank within three minutes. The Chief Officer, seeing a number of the crew attempting to lower a boat, jumped into it with the intention of cutting the falls as, owing to the heavy list, the boat was resting on the ship's side. The ship, however, sank too quickly and took the boat down with her. The Chief Officer and two members of the crew managed to reached an upturned boat which had floated clear of the ship. For two and a half days they clung to the bottom of this boat until weather conditions permitted it to be righted. The boat was found to be badly waterlogged and nearly all the equipment, food and water had been washed away. During the next six days two of the occupants of the boat died leaving the Chief Officer alone. Five days later he was picked up. Chief Officer Duncan acted with courage and resource in attempting to release one of the boats, when the ship was sinking and he displayed outstanding qualities of fortitude and endurance throughout the whole of his tremendous ordeal. When the ship sank, nine other members of the crew managed to reach three rafts, which they lashed together. They attempted without success to reach the upturned boat to which the Chief Officer was clinging. During the first night in the heavy seas one of the three rafts broke adrift and disappeared with three of the crew. The remaining two rafts kept together for about ten days, when one of the men died. During this period the remaining rafts were capsized several times by heavy seas and eventually one of them began to break up. The men on this raft were transferred to the remaining sound raft, but during the operation another man was lost. Four men now remained on the last raft, on which they drifted for a further five days before being picked up. Great courage and fortitude, were displayed by Third Officer Eaton, Radio Officer Powell, Fireman Cuthbert and Seaman Kirkwood during the fifteen days they were adrift. 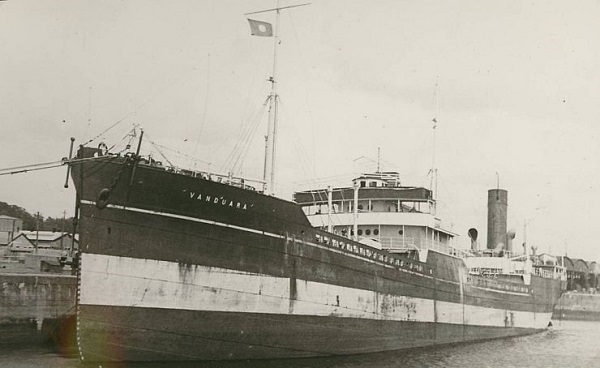